The seed for this quilt was a bargain-ous £10 blue batik jelly roll bought second hand from another quilter.  After it arrived in the post it sat in the kitchen and on the table for quite a while.  I couldn’t face putting it in my studio and not doing something with it soon…  I didn’t feel so precious about this jelly role as it didn’t cost what some of my others did so I didn’t have the fear of wasting the fabric if I ended up not liking the quilt.  With the strips being a similar blue I decided that, having never having done a jelly roll race, I wanted to try one.  I didn’t want it to be too simple so I decided to get some contrasting yellow batik to go between each strip.

I’m not sure when I had decided that this was going to be for my Aunt Sue but I think it was early on.  She lives by the sea and has a kaftan in a similar colour.  I think likes quite strong colours and has several batik items… I really hope I have not got this wrong.  She like me has afternoon naps while possible so a smallish quilt she can keep warm under will be used.  Also I’m hoping the sunny colours will prove cheerful in the winter months when its most used. 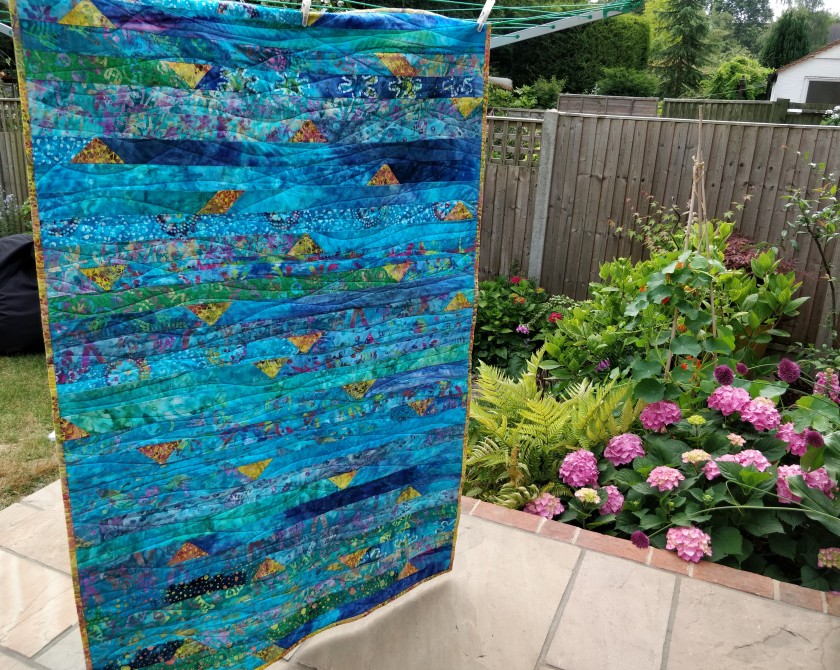 The quilt top really did come together very quickly once it was a long strip.  And boy was it long! Trying to pack it away out of cat and kiddy paws was a hassle…..I should be using my studio but I want to watch TV or be near the hubby when he is home in the evening.  After carefully trying to separate strips of the same fabric (though as its batik not too similar) I discovered that in about 3 or 4 places strips of the same fabric ended up next to each other.

I do like the unknown result of a jelly roll race.  So often you already know what its going to look like before you finish and I think that is why I can become bored with projects and don’t finish them.  If only I could make use of this ability to visualise for profit!!

I opened up my walking foot to quilt as I decided I wanted to do some simple waves for the quilting.  I didn’t want to detract from the fabric and the simple piecing I felt meant it needed simple quilting.  I did randomly decide I wouldn’t quilt on the yellow.  I think because I didn’t want to dilute their colour at all.  Not having used a walking foot before I was disappointed it didn’t produce an even stitch as I had hoped.  It was better once i raised the feed dogs a little so it gripped the fabric better.  I think maybe the main reason for this also was the weight of the fabric which was not on the table surface stopping the fabric being pulled through! Now I understand why quilters rave about their table extensions and put their machine on a large table!!

I wanted to do a label of dedication but for it to be subtle.  Turns out it might be a little too subtle.  I wrote free motion ‘Sea for Sue love Helen’ but you can hardly see it and the practice was much better.  I think it was the size of quilt on a small table pulling it and the fact that my machine doesn’t have a needle down position so occasionally jumps if I don’t ensure to wind the needle down before moving my hands.  It is my birthday soon so considering an upgrade or at least borrowing my mum’s machine for when I want to do an important project.  Also practice practice practice and yet again don’t just rush things!!!!!!!! 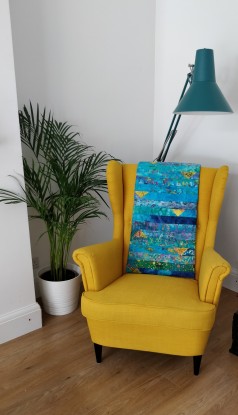 Anyway let me know what you think of this quilt….. (photo not staged at all obviously! my house is always this tidy!!)

My only sewing project (SO FAR!) since having baby is a quilt for my auntie.  She doesn’t know I’m making it for her and I can’t wait to see her reaction.   I’ve been doing bits and bobs on it when I can and I’m now onto hand stitching the binding.

This is my favourite stage of a quilt.  You only do it when your happy with the rest and it means it is almost done! Plus I love the simplicity of sitting stitching, obviously while I watch some trash on TV (dare I admit that its currently Love Island).